Located between Kiowa Avenue and Goshen Avenue, 1115-1121 S. Westgate Avenue features two parcels totaling ±6,900 square feet of land in the highly desirable Brentwood neighborhood with [Q]R3-1 zoning. The lack of developable R3 and R4 zones in LA is one of the biggest roadblocks to constructing new apartments, making this an extraordinary opportunity for savvy developers looking to build multifamily housing development. The former building has been demolished and the lot currently sits vacant. The Seller has submitted plans based on by right development for a four (4) story, eight (8) unit apartment building with one (1) level of subterranean parking. Plans are pending.

The Property’s unbeatable Brentwood location is one of Los Angeles’s most desirable and sought after neighborhoods , combined with a high barriers to entry market, making this a rare development opportunity. The Property is located less than one mile from the VA Greater Los Angeles Healthcare System and has a high walk score of 86. It is also in close proximity to UCLA, Westwood, Santa Monica and The Pacific Palisades. The location provides easy access to both the 405 and 10 freeways and access to many of the best shopping, dining, and museums that Los Angeles has to offer.

You can download development information and other available due diligence documents by going to www.WestgateDevelopmentOpportunity.com.

WESTMAC Commercial Brokerage Company is pleased to present the opportunity to purchase or lease 11954-11960 Wilshire Boulevard, a two-unit, approximately 5,465 square foot commercial building located on approximately 5,480 square feet of land in premiere West Los Angeles. This is an ideal opportunity for a buyer or tenant looking for prime storefront retail or office space in the highly coveted Brentwood submarket of Los Angeles, CA.

The property is well located along Wilshire Boulevard, where over 45,000 cars travel each day (per LA Traffic Department). This prime location benefits from the dense, high-earning demographic that resides in the area, and offers access to the highly affluent neighborhoods of Brentwood, Westwood, and Santa Monica. The property is directly across from ample amenities including: Ross Dress for Less, CVS, Jamba Juice, Rubio’s, Fatburger, and many more. The property offers easy access to the 405 freeway and is less than a 15-minute drive (3 miles) to Downtown Santa Monica.

Los Angeles – WESTMAC Commercial Brokerage Company has arranged the sale of 11699 San Vicente Boulevard, a gas station located in the upscale Brentwood neighborhood of Los Angeles. The sale included the service station business along with the real estate and sold for $8,815,000.

11699 San Vicente Boulevard, currently operating as the Conserv Fuel service station, is located on a triangular lot at the northeast corner of San Vicente Boulevard, Barrington Avenue and Gorham Avenue. The property is situated on approximately 7,098 square feet of land and is comprised of two canopies over twelve fuel hoses plus a 99 square foot combination payment booth and limited item C-Store.

“We were fortunate enough to go into escrow quickly,” said T.C. Macker, CCIM. “The station does extremely well. Top that off with a highly desirable, rarely-traded Brentwood location, and you’ve got a recipe for success.”

The seller was the owner and operator of the service station. The buyer is a gas station operator who purchased the property as part of a 1031-exchange.

WESTMAC Commercial Brokerage Company is a Los Angeles based commercial real estate brokerage firm founded in 1988 by one of L.A.’s most recognized commercial real estate brokers Timothy C. Macker. Our firm is a full-service real estate company that provides exemplary consultation, advisory and marketing services to property owners, users, developers and investors. From 2001 until 2018, the company was affiliated and a franchisee of Coldwell Banker Commercial before returning to its roots, as WESTMAC Commercial Brokerage Company.

Our 30+ professionals specialize in four distinct market niches: office, industrial, retail and multi-family properties. Among the primary services the firm provides are exclusive marketing of both for-sale and for-lease properties, representation of tenants seeking to lease commercial space, and consultation to real estate investors, developers and owners on the disposition or acquisition of commercial property. Our standard is “The client’s best interes

WESTMAC Commercial Brokerage Company and Petroleum Realty Group are pleased to present the rare opportunity to purchase 11699 San Vicente Boulevard, a service station situated on a triangular lot at the northeast corner of San Vicente Boulevard and Barrington Avenue in Brentwood Village. The offering includes the service station, business currently operating as Conserv Fuel, along with the real estate.

The owner of the subject property currently operates the fuel facility. The station has two (2) 20,000 gallon double walled fiberglass tanks that were installed in 2006. The tanks are split to carry four products, diesel, E-85, 91 and 87.

11699 San Vicente Boulevard is a rare opportunity to purchase a very profitable gas business at an easily accessible bustling 3-way intersection, with an additional opportunity to expand and add large C-Store on the site. The property comes with a clean phase one with attached “No Further Action” letters, allowing for potential future development opportunity on the land. The zoning allows for other uses including multifamily, retail and office (buyer to verify), all of which are in significant demand in this location.

Coldwell Banker Commercial WESTMAC has arranged the sale of 11699 San Vicente Boulevard in Los Angeles for $3,680,000.

“There was a bid process in place,” T.C. Macker said. “We submitted a great offer with a short 15-day escrow and were thrilled when it was accepted.”

Timothy Macker, CEO of Coldwell Banker Commercial WESTMAC said, “I’m extremely proud of T.C., who has continuously distinguished himself amongst his peers nationwide. His hard work, dedication and leadership of the company has not only made a tremendous impact in our industry, but has also helped make Coldwell Banker Commercial WESTMAC the #1 office in the State of California.”

T.C. Macker, CCIM has been awarded “Circle of Distinction” by Coldwell Banker Commercial from 2004 to 2016. Mr. Macker was top 1% in the world for Coldwell Banker Commercial in 2015 and a Platinum Distinction winner. Further, Mr. Macker was ranked #3 in the world out of 3,200+ agents for 2015, #7 for 2014, #3 for 2013 and #4 for 2012. He is an active member of CCIM (Certified Commercial Investment Member) for over 12 years. On a national level, Mr. Macker is on the CBC Advisory Board representing the California Region.

Our 30+ professionals specialize in four distinct market niches: office, industrial, retail and multi-family properties. Among the primary services the firm provides are exclusive marketing of both for-sale and for-lease properties, representation of tenants seeking to lease commercial space, and consultation to real estate investors, developers and owners on the disposition or acquisition of commercial property.

Our standard is “The client’s best interest must be the guiding force behind all services.” 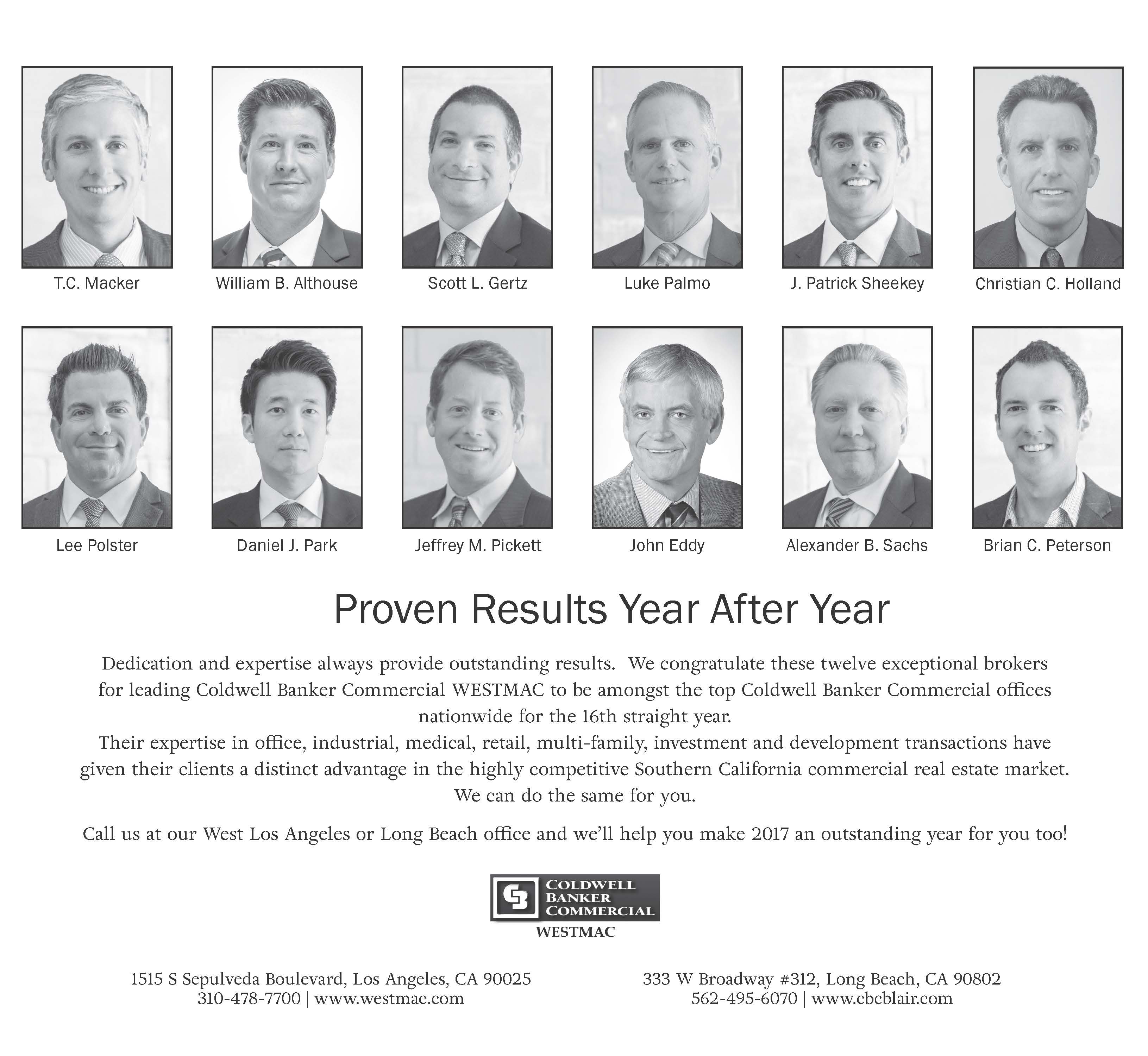